April’s Project of the Month: “A Room for you”

The project “A room for you” is a project which is very close to the Soroptimists of San Marino as they have been working for its realization between 2017 and 2019. The project consists in creating a space expressly dedicated and organized to welcome women who want to report acts of violence against themselves and/or their children. “A room for you” is, for the Republic of San Marino, an absolute novelty, one of the possible actions to combat violence, carried out in synergy between the club, public offices and institutions. The collaboration has made it possible to add this tool to the services offered by the network existing in the area for the needs to combat violence. 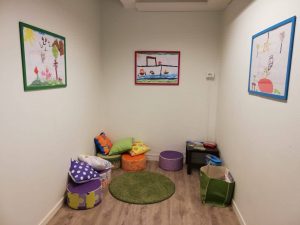 The club has chosen to undertake this project to support the victims of violence in difficult and traumatic situation at the moment of reporting. The project was born with the aim to create an environment as much as possible encouraging for women to have a less traumatic approach when they decide to denounce their persecutors very often in the context of emotional relationships. The dedicated “room” gives attention to the experience and its painful narration and in case there are minors, it guarantees psychological protection in conditions of privacy and security. 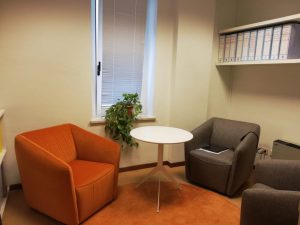 The proposal of the Club to create the “room” was supported by the Authority for Equal Opportunities and highly welcomed by the Gendarmerie Command, both engaged for years in the network for needs services of the territory to combat violence. More concretely, the Gendarmerie accepted the project proposal and the production company checked the conditions. On the other end, the Authority for Equal Opportunities has been consulted and the offices in charge for authorizations were involved; all those actors enabled the Soroptimists of San Marino to achieve the realization of the “room”. 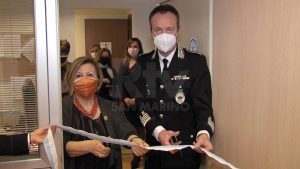 The inauguration of “A room for you” took place on Monday 8 March 2021, in the frame of International Women’s Day; truly symbolic!

Finally, this interview with the Deputy Brigadier responsible of the Office given to the Soroptimists of the Club, reveals the full dimension of the importance of this unique project in San Marino:

Women who generally suffer of psychological or even physical forms of violence, have low self-esteem of themselves which generates insecurity and fear. This reaction, at times, creates difficulties in expressing themselves freely, precisely because of the feeling of terror they have towards their molester. Sometimes, even the lack of knowledge of the laws in force and the paths that can be taken create many doubts in them;

Surely a hospitable and comfortable room gives to the victim an extra stimulus to let herself go in bringing out the feeling of being “submerged” there may be in her life;

The promotion of good practices in the method of welcoming victims who have suffered mistreatment or violence is essential in order to put them at ease and find benefit in dealing with the interlocutor;