Highlights from the Governors’ Meeting 2019

As SIE President Renata Trottmann Probst’s biennium focused heavily on Standing Up for Women in Eastern Europe, it is fitting that Zagreb, Croatia was the setting of the Governors’ Meeting 2019. Over two days, Soroptimists from all over the Federation and other parts of the SI world gathered at the Sheraton Zagreb Hotel to network, find out about the Federation’s projects and services and build and celebrate friendships. This year the election of the 2019-2021 Board was also on the agenda. 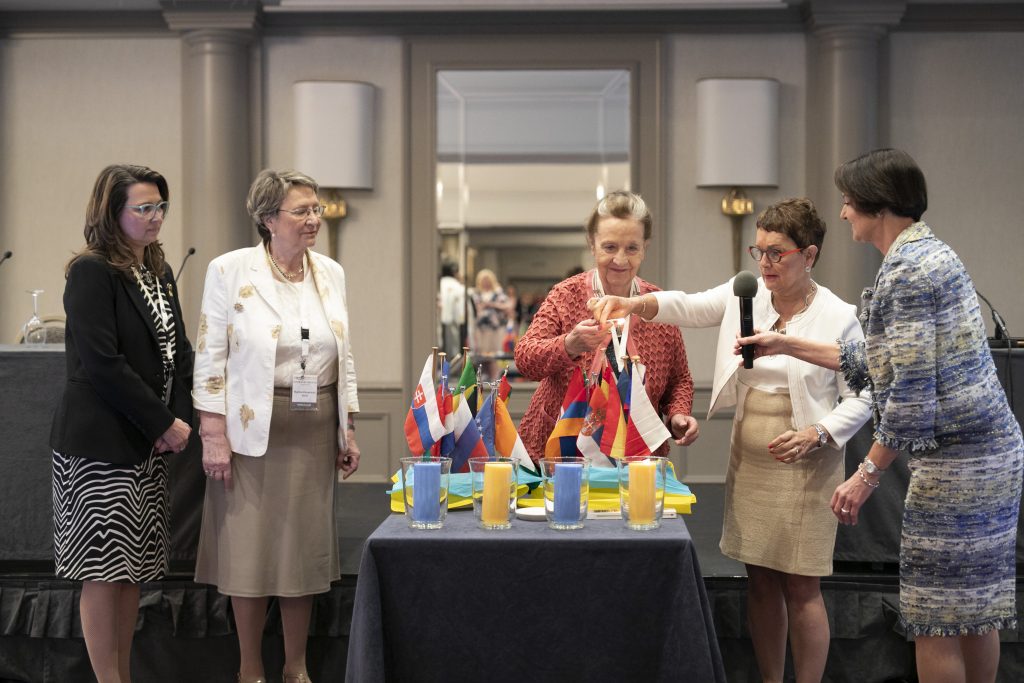 Following President Renata’s opening speech, the floor was given to SI President Mariet who stressed that as “principles of human rights continue to grow in legitimacy, and the call for equal rights for women rises the world over, so too does the significance and importance of the role and participation of women. To empower women means structural issues, such as attitudes and social norms, must be addressed. Equal access to education and vocational training must be achieved.” SIGBI President Sue Williams was next to take the stage, indicating that she hoped to “deepen my understanding of the strengths we have in common and take that back to [the SIGBI] Federation.”

Next up: SIE Elections! For the first time at an SIE Governors’ Meeting, Governors used individual electronic devices which made the process more accurate and efficient. Constitution and By-Laws Committee Chair Signe Justesen guided the Governors through the elections. The first candidate to be elected was Carolien Demey, current 1st Vice President Virtual Development, who will take on the role of SIE President 2021-2023. Carolien is “tremendously happy and grateful for [the Governors’] support to take up this challenge!” 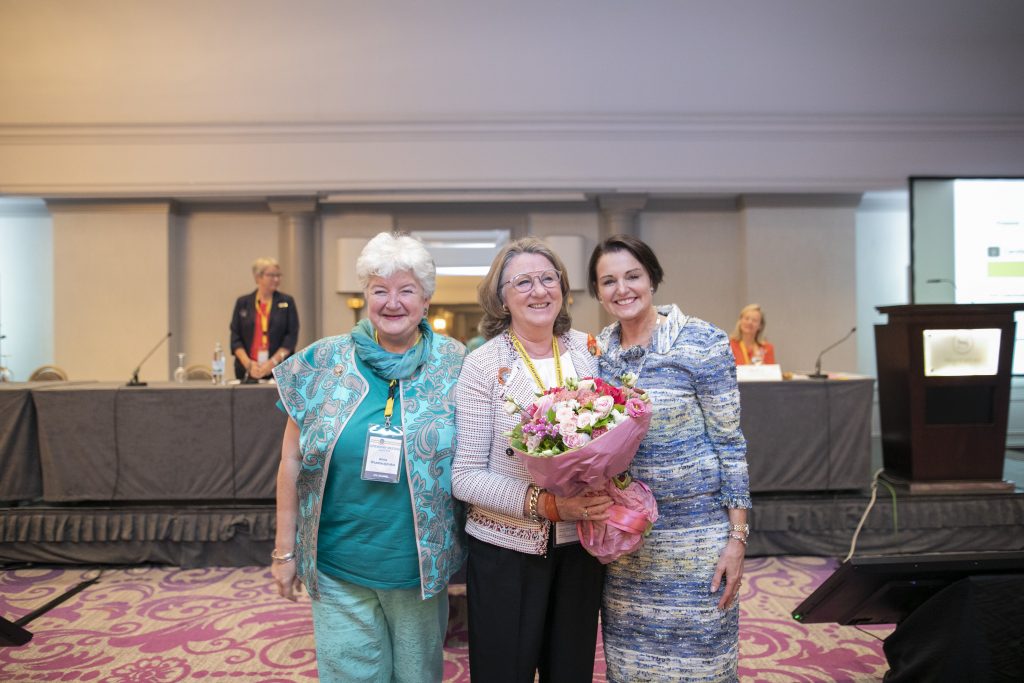 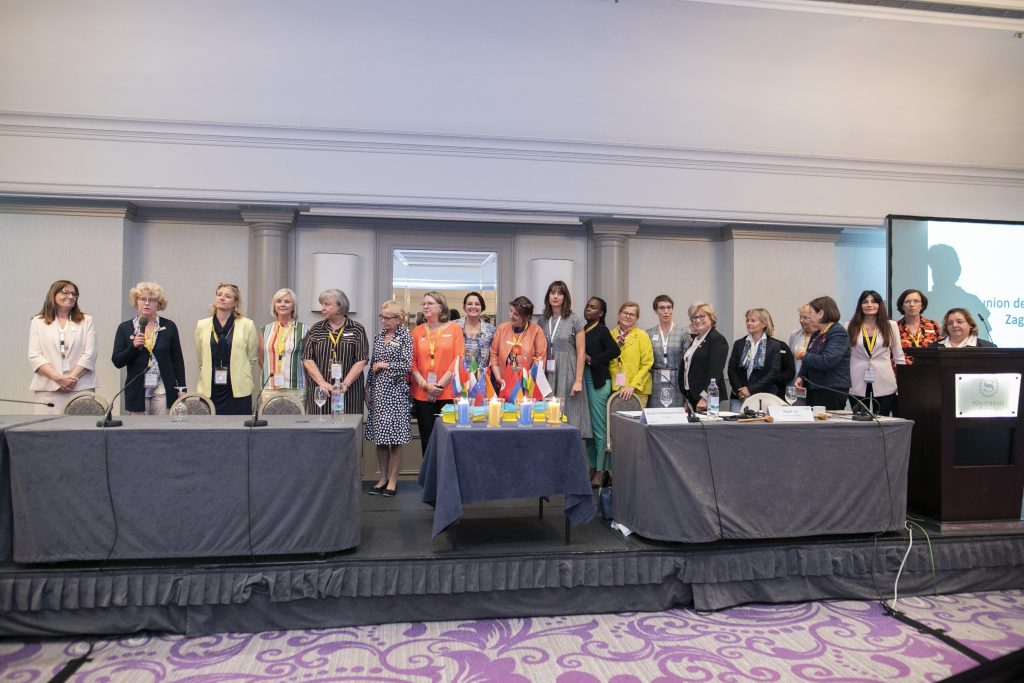 Following the elections, Chair of the Extension Committee Gerda Rosiers took the stage to update the participants on Extension. Governors voted for the creation of two new clubs in Sudan and Montenegro. The clubs of Cairo, Tirana and Lomé Agape were dissolved.

Prior to the Governors’ Meeting, several workshops took place, dealing with the New Constitutions and By-Laws, Virtual Development, Eastern Europe and Africa. These exchanges were highly beneficial in preparation of the discussions during the actual GM.

The change of insignia was a symbolic moment connecting the present and the future. President Elect Anna Wszelaczynska embodied this spirit in her biennium speech, especially by carrying on the motto “We Stand Up for Women” into her biennium. She also expressed that mentoring is the “best way to rejuvenate our organisation” and stressed that we need more coherence and consistency as we need to “speak with one voice.”

Day 2 of the meeting began with Renata Trottmann Probst’s inspiring President’s Theme Speech in which she summarized the key goals of her Biennium and expressed her gratitude to the Board members and SIE HQ staff who helped her achieve them. Renata concluded that “We have made a big step forward, and I am very happy and thankful that my successor Anna will continue to further the many issues that have inspired Unions and Clubs in this biennium. This continuity is crucial for our success and progress!”

As usual, awards for the Photo Competition, Best Practices and Extension were then presented. Huge congratulations to all nominees and winners! 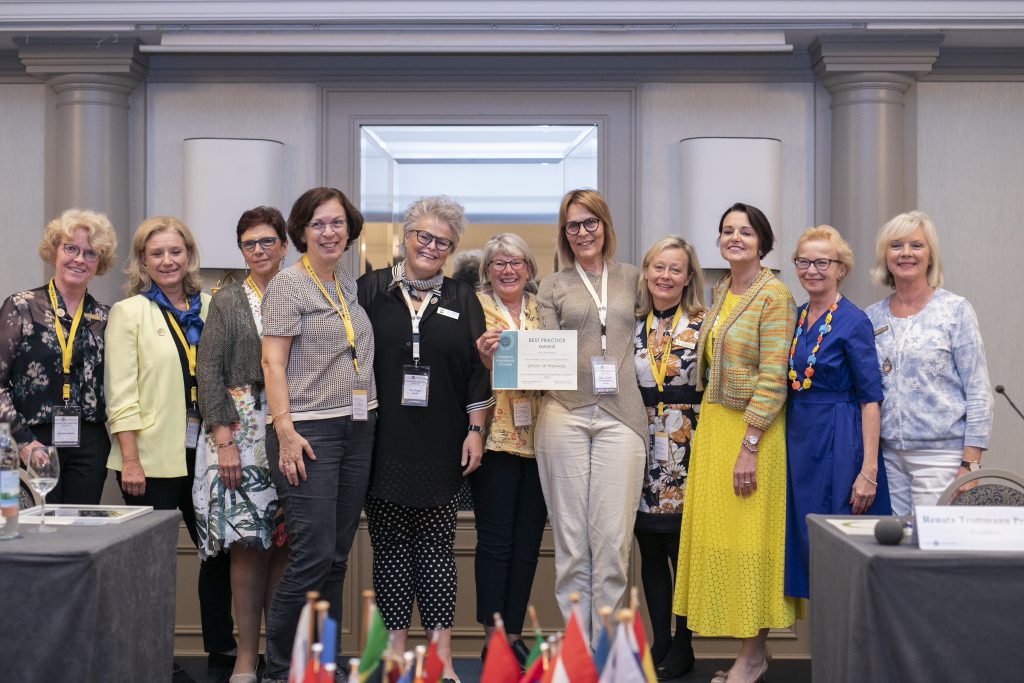 The GM presentations and resolutions will be uploaded in the Members Area of the website shortly. The minutes will be available in September 2019. To see all the photos from the event, please check out our Flickr!