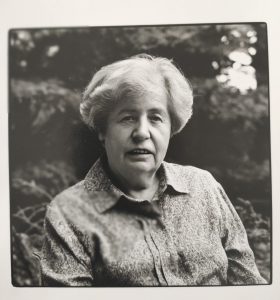 “We stand up for Women” – this current motto of SI Europe could have come from Gisela Freudenberg.

When the SI Club Weinheim/Bergstraße was founded in 1986, it immediately gained an experienced Soroptimist in Gisela, who had previously been active in the Mannheim and Heidelberg clubs and had already “served” our women’s network in the best sense of the word as German Union President from 1982 – 1984.

The topic of the changing world of work with the resulting special problems of women determined Gisela’s term of office. Thus, in the side program of the 1984 AGM in Wolfsburg, the participants had the opportunity to learn in detail about the modern world of work at the Volkswagen plant and to discuss the difficulties of women in industry in the context of a panel discussion with women who were employed by VW.

In the same year, a three-country meeting was held in Schwetzingen in September with the theme: “Living with History. Women who had experienced World War II and the generation of baby boomers dealt with the questions: “How did I experience the end of the war?” and “What does homeland, nation, fatherland mean to me?” in an international German-speaking way – here it proved once again how important and peace-building the cross-border exchange, getting to know each other and the friendly ties of our network are.

Whereas Gisela had previously been involved as managing director and chairwoman of the Soroptimist-Hilfsfonds e. V., during her term as Union president she was able to charter 11 new clubs – i.e. there were now 51 clubs in Germany.

In the following years, the German Union had a worthy representative at the European Federation level in Gisela Freudenberg – as Governor and committed Extension Officer for Africa and Eastern Europe. On the occasion of the European Congress in Athens, Gisela was inaugurated as President of the European Federation from 1993 to 1995; consequently, the motto of her term of office was “Friendship without borders”. Consequently, the worldwide project “Open Heart – Open Door” (founded by Heidrun Konrad, SI-Club Spittal/Millstättersee, Austria) came into being during this time.

In the long decades of her life, Gisela Freudenberg also committed herself convincingly and convincingly to voluntary work outside her soroptimistic activities. In accordance with the SI goals, the commitments of the biologist and family manager with a doctorate were above all directed toward educational justice, the implementation of social justice and the improvement of German-Turkish and German-Israeli relations, for which she received multiple civil society honors.

According to Kurt Tucholsky: “A country is not only what it does, but also what it tolerates”, Gisela Freudenberg provided lasting encouragement to become aware, to take a stand and to make a difference, just as she exemplarily presented herself throughout her life. After a fulfilled life, Gisela now peacefully fell asleep on July 6, 2021, shortly after her 98th birthday. We say goodbye to her full of respect and keep her friendly in best memory.