Let’s stand up for Women during the 16 days!

In Belgium, the 16 days campaign is always an active national operation mobilising all the clubs of the Union!

The Soroptimists are organising multiple initiatives such as:

All the Belgian clubs received a toolkit with instructions (material and tools of communication) to pursue an efficient campaign. 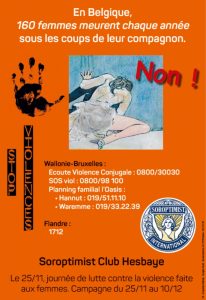