Little red riding hood as you’ve never seen her before

Parents (more often mothers) and carers of children with disabilities often struggle with daily tasks and obligations and have little time and energy for activities outside of their daily schedules. Their situation is further complicated by a lack of structural support and appropriate and accessible activities.

The Soroptimists of Zagreb Centre wanted to enable children to experience theatre adapted to their specific needs, and to alleviate some of the organisational burdens on their mothers and carers. The idea was born to provide interactive readings of fairy tales with animated illustrations and live music. The plays would be specially adapted to the needs of children with neurological disabilities, developmental difficulties, blind or visually impaired children, and children from socially vulnerable families.

To take the project from concept to the stage, SI Zagreb Centre partnered with the local, independent theatre group ‘Poco Loco’, which specialises in interactive theatre for children. Coordinating the project from start to finish, the Soroptimists held meetings and consultations with specialists to adapt the popular story of Little Red Riding Hood into an interactive form accessible to the children. 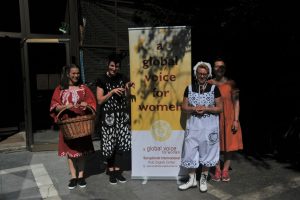 The Soroptimists organised seven events, six of which were held in a city park and one in a therapeutic urban garden. Parents were invited to participate in the plays free of charge and several club members volunteered with the actors. 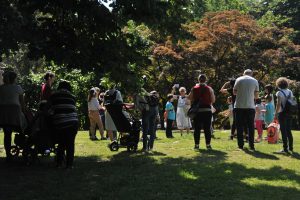 Parents and children attending the play

About 330 children saw the plays with their mothers

Helping mothers and carers of children with disabilities is complex and multifaceted, and the Soroptimists of Zagreb Centre are pleased that they were able to make even a small contribution. Only by working hand in hand with families, and especially mothers (many children in precarious situations live only with their mothers), can solutions be found to support disabled children and the people in their lives. 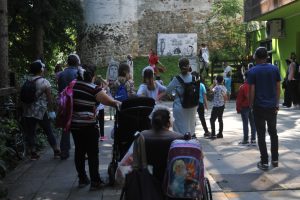 Which is your club or union’s proudest project? Tell us about it and we’ll include it in the LINK and on our social media channels so that it can gain more visibility, as well as inspire and help other Soroptimists.

Send your projects or activities to Virginie: siehq@soroptimisteurope.org