The title nobody wants

Romania has an unenviable title. The country has been reported as having the second-highest number of teenage mothers in Europe according to a report by UNICEF together with SAMAS.

The situation is not new.  In fact, at the end of 2015 some 60 NGOs found it so critical that they called on the Ministry of Education to introduce sex education courses in schools. The signatories believe that this would not only help limit the number of unwanted pregnancies, but also protect young people from sexually transmitted diseases.

The lack of this basic education is just one of the reasons why the issue is so endemic in Romanian society. While schools do not include sex education in their curriculum, at home the situation is often no better. Some families are still reluctant to discuss sexual education with adolescents, considering that it would influence the early initiation of sex life. Currently, the proposed law to introduce sex education in schools is being debated in Romanian politics. Understandably, discussions on this controversial topic have spilt into Romanian society.

While a lack of reproductive health education is a huge factor, the situation is more complex than that. Other factors of this phenomenon include poverty, and emigration – leaving many children in the care of their grandparents.

Rather than wait for change, Soroptimists make change happen.  In 2017, they did just this. All the clubs of the SI Romania Union stood together in partnership with the SI Denmark Union (which provided the financing) to launch the ‘Teenage Mothers’ project.

This project ran across the whole of Romania to help many girls.  In Slatina, it was carried out with the support of the Child Protection Directorate and the School Inspectorate of County Olt. Soroptimists identified two teenage mothers who were studying at school. One, a 16-year-old girl with a one-year-old child, the other a 16-year-old girl with a one-month-old baby. Both girls needed support to continue their studies and to overcome their physical, mental, social, financial and health problems. 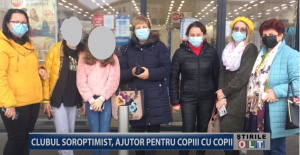 This project helped many girls to continue their education and live a healthier family life. Donations helped ease the strain of raising a child for the families of these teenage mothers, and their babies received better care. But the most important thing was that many underage girls were educated to prevent pregnancies.

“Thanks to this project, minor mothers can continue a normal life so that they regain their dignity, their self-confidence.”

The project had some tough objectives:

The first part of the financial aid from the Soroptimist Union of Denmark was used to purchase and distribute products to the mothers, such as baby food, baby clothes, sanitary items, clothing and hygiene items.

The story was picked up by the Romanian television channel OLTTV.  This media coverage helped raise awareness of the benefits of providing sex education in Romanian schools.

Through this project, our Members have generated visibility on the Soroptimist movement.

Encouraged by collaboration between the Soroptimists of Slatina, the Olt County School Inspectorate, and the Child Protection Directorate, the Board of the Club continues to identify teenage mothers who come from very vulnerable families and need support to stay in school.

The Soroptimists of Romania and Denmark have big hopes for Romanian girls, women and their families. They believe that this project, which is a real vector of change for these young girls, can act as an impetus for change on a much larger scale:

“Through collaborations with the institutions involved, namely the Olt County School Inspectorate and the Child Protection Directorate, we hope that these institutions will intervene with the political and legislative institutions in order to introduce sexual education in the schools”