“Angels flown in my world”

Map of projects
Kutaisi Georgia
About this project

Abuse, desperation, death. Three miserable words and realities for thousands of women living in Georgia suffering from domestic abuse. Even when they do seek help, that is often not enough. It is not uncommon that female survivors return to their abusers and become victims once again.

Why is this the case, I am sure you are asking yourself. Well, often the first step to turning their lives around, is living in a government-funded shelter. Limited services and funding mean that the maximum time a woman may stay in a shelter is six months. During this time, due to a lack of services offered by the government (such as housing, medical care, legal services and education), more than 90% of women remain without professional education or employment perspectives. Crucially, economic stability is necessary for their future independent living.

To achieve female empowerment and end violence against women in Georgia, the starting point was clearly vocational training. The Soroptimists of Kutaisi-Colchis initiated the project: ‘Economic development support of socially vulnerable women in Georgia’. The objective was to support female survivors of domestic abuse living in Kutaisi, by giving them access to vocational training and improving their employment/self-employment prospects, thereby reducing the likelihood that they would return to their abusers. 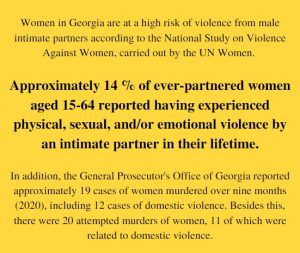 The Soroptimists of Kutaisi-Colchis, Georgia have been active agents of change! They leveraged resources, expertise and knowledge within their Club and enjoyed the support of key local organisations, including the CSO Education Development and Employment Center and the City Hall of Kutaisi Municipality. Their programme helped ten women, living in state-supported shelters for female survivors of abuse, to carry out vocational training. The women were highly motivated to become employable or self-employed. They took 300 hours of intensive professional training courses in hairdressing. Their words speak far louder than ours and show that the courses did much more than teach a profession:

“This project entirely changed my life. I found friends here who support me anytime and anywhere. I can easily talk about my problems and needs with them. These ladies are angels flown in my world!”