As part of the activities organised before the Governors’ Meeting in Lucerne, three interactive presentations were given. Each talk was given by a prominent and seasoned defender of women’s human rights, namely Dr. Ghada Hatem-Gantzer, Cathrin Schauer-Kelpin, and Alina Radu. Through their inspirational speeches, they demonstrated how they have dedicated their lives to standing up for women in their respective fields and countries.

“The Women's Home in Saint-Denis, a care facility which promotes women's independence”, by Dr. Ghada Hatem-Gantzer

Doctor Ghada Hatem-Gantzer, gynaecologist, is a former house doctor with the Paris Group of Hospitals. In 2016, further to working as a medical officer in several establishments, and having founded several Fertility Centres, she set up “The Women’s Home” in Seine-Saint-Denis “to repair” female victims of circumcision, rape, incest, and physical and psychological violence. 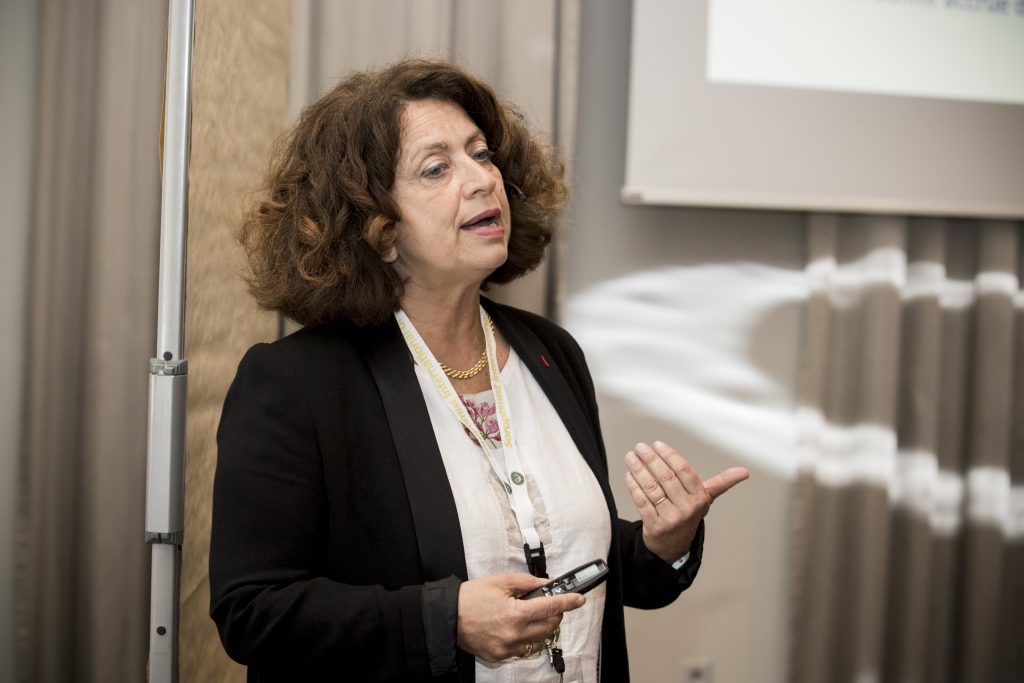 At the beginning of her Lucerne presentation, Ghada acknowledged that there has been a marked acceleration in the field of women’s rights in the past hundred years, in particular voting rights and the right to work without the husband’s permission, paternal rule being replaced by parental authority, the recognition of marital rape, and finally the right to contraception and abortion. But there remains much to be done to combat the violence with which women are confronted.

During numerous conversations with Soroptimists taking part in the workshop, Ghada explained that gynaecologists are regularly confronted with harmful and violent traditions: requests to repair the hymen in line with a humiliating custom dating back to the middle ages; the custom of hanging a soiled cloth out of the window the morning after the wedding night; requests to perform sexual mutilations, a practice which has hugely detrimental consequences on health and sexuality and is only very slowly decreasing; forced marriages often associated with marital violence with proven negative impact on the mental health of children; incidents of rape and incest. All these situations induce post-traumatic stress and require specific care.

The Women’s Home is a structure which provides multi-disciplinary care of all forms of violence to women. The three main sectors which make up the centre are: family planning, the violence unit, and the sexual mutilation repair unit. In 2017, it provided in excess of 17,000 consultations to female victims of violence.

The particular characteristic of this centre is its approach to care provision, and the coordination of the care which it provides thanks to a multi-professional co-ordinated approach: healthcare professionals, social services, police, magistrates and lawyers share information and organise an adapted response. Personal accounts, many harrowing, are shared between professionals within the confines of confidentiality, thus avoiding women having to repeatedly retell their experiences. With the help of volunteers, self-esteem workshops successfully supplement the medical care.

Thus, The Women’s Home shares the objectives and values of the Soroptimist Movement!

Click here to learn more about the Women’s Home

This article was written by Evelyne Para, President of the French Union, who moderated this interactive presentation.

“Forced prostitution, human trafficking and sexual exploitation of women and children in the border regions with the Czech Republic”, by Cathrin Schauer-Kelpin

Cathrin Schauer-Kelpin is well-acquainted with the social, economic and criminal backgrounds and conditions of forced prostitution from her more than 20 years of practical work with the affected women and children.

With advice centers, street work, shelters, baby hatches and public relations, KARO e. V. is an organisation based in Plaun, Germany, that works against social isolation, impoverishment and illnesses of those affected. They enable some of these women to opt out of forced prostitution and, moreover, strongly oppose human rights violations and organised crime.

KARO is committed to a ban on prostitution due to its violation of human dignity.

Cathrin Schauer, founder of this initiative, pointed out that the red light milieu is characterised by violence, abuse, organised crime and grave human rights violations. Prostitution is life-threatening for women and men forced to sell their bodies day and night.

As part of the programme preceding the SIE Governors’ Meeting in Lucerne, Cathrin Schauer, spoke to 40 German Soroptimists about this horrific topic. She shared real cases and portrayed the everyday life of affected women. As an insider, she gave a glance into a socio-political field and into a life which nobody among the audience could have imagined.

What unites KARO e.V. with Soroptimist is that both give a voice to women and girls who do not have one. Cathrin Schauer works at the operational level on site and soberly shared her knowledge with the interested listeners about what’s going on in the scene, in which the disregard for women and girls dominates their daily lives. The individual cases are too complex to be presented at this point, but one message became very clear: despite many efforts, the problem of human trafficking and forced prostitution exists almost unrecognized and is not accepted in society as a problem for all of us.

Violence, abuse, human trafficking and sexual exploitation are only a few of the many ugly faces in society. The vulnerable situation of a person is often ruthlessly exploited by sex tourists, pimps, partners and relatives who, in consequence, leave broken souls to their own destiny. KARO e.V. takes responsibility and offers a variety of help services.

But this commitment is not enough. Soroptimist International could also be involved and raise awareness for this issue. As advocates and multipliers, we could emphasize this problem to the stakeholders and councilors in public offices.

The Soroptimist crowd’s curiosity was raised throughout Cathrin’s presentation and many questions were asked. Cathrin expertly answered questions about the measures authorities take, how she and her association get in contact this the specific target group, and how a woman can leave the world of forced prostitution.

The work of Cathrin Schauer and her team at KARO e.V. sensitized the awareness of forced prostitution, trafficking and sexual exploitation.

The key remarks of the speech might inspire SIE to support the commitment of KARO e.V., in order to open new life perspectives for women who dare to escape out of this criminal scene in the future.

Together we could stand up even taller for women and take action to create a world where no one is left behind.

This article was written by Ingeborg Dietz, SIE Programme Director, who moderated this interactive presentation. 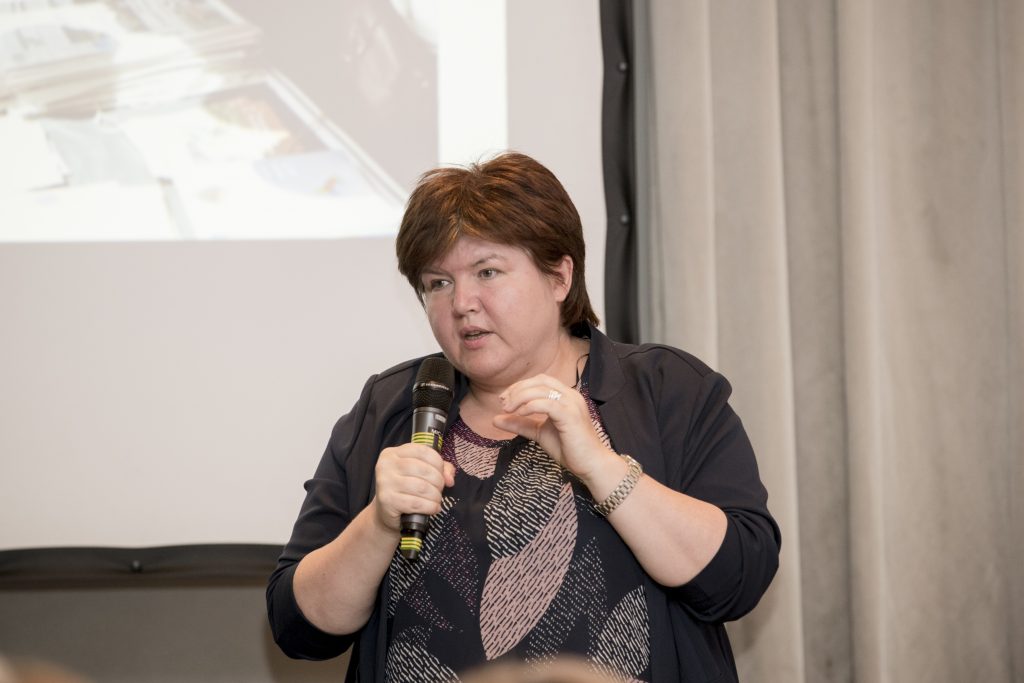 Alina Radu is a person who we all should admire for her ongoing work against human trafficking. As she rightly says, «Human life and freedom are the most valuable things in the world.»

Alina Radu was born in a Moldovan village and studied at the faculty of Journalism at Moldova University, graduating in 1989. From 1997 on, she has participated in courses organised by international media training associations in Bulgaria, USA, Albania, Greece, Slovakia, Finland and Bosnia.

She began her career working with the Moldova State Television. After the Republic of Moldova became independent from the Soviet Union in 1991, she worked for the first independent Moldovan media. In recent years, together with a few women journalists from Moldova, she established the independent investigative newspaper: “The Guard Newspaper”, or “Ziarul de Garda”.

Alina was the first person to investigate organ trafficking in Moldova. Despite the fact that Moldovan police and other authorities were saying that there are no victims of kidney trafficking, she found, from village to village, some 40 people who had been forced to sell or donate their organs.

She spread the information, and in a short time the Council of Europe made a report on organ trafficking in Europe, based on Moldovan cases and Alina’s investigation.

For her many investigations on trafficking in women, Alina not only did research in her own country, one of the main Balkan sources of trafficked girls, but also went to Albania, Macedonia, Bulgaria, Bosnia and Serbia to look for Moldovian victims. She investigated the disappearance of girls and women, and their abuse at the hands of peacekeeping soldiers and policemen. She also examined networks of traffickers, and reported who they are and how they work by publishing her findings in articles and documentaries.

Her reports on children’s and women’s issues have appeared in the Moldovian, French, English, German, USA, Serbian, Norwegian and Swedish media. Her work has been recognised by international and national organisations. She won important prizes for investigations on trafficking and women’s issues.

Through her articles, Alina has raised awareness about this problem and the need for solving it. She is a staunch upholder of independence, freedom of speech and free press.

Her presentation made the audience raise a lot of questions about how she could go on, putting herself and her family at risk, still being inspired to work for freedom of speech. Many Soroptimists in the audience admired her ongoing work against trafficking, and wanted to give economic support to her newspaper in Moldova.

It was a great inspiration to listen to her presentation, and to learn that one must not think that however the powerful influence of the opponent is, you must never give in.

This article was written by Bente Lene Christensen, President of the Norwegian Union, who moderated this interactive presentation.