A talk by Manfred Paulus, a former Superintendent of the Criminal Investigation Department in Ulm, Germany, inspired SI Club Aalen/Ostwürttemberg to initiate an enormously successful campaign against human trafficking and sex slavery in Germany and Romania some three years ago. Since then, Paulus and club members, in cooperation with Soroptimists from Arad, Temeswar and Kronstadt (Brasov), have reached more than 2000 pupils in 20 Romanian schools to inform them about the recruitment methods of traffickers and how to prevent falling prey to their tactics.

President of SI Club Aalen/Ostwürttemberg Claudia Köditz-Habermann has now appealed to other clubs in SI Germany to participate in a nationwide campaign to raise awareness of this horrific crime by placing large posters throughout German cities. The posters will be displayed on 5th October, the International Day against Prostitution and 18th October European Day against Human Trafficking and Sex Slavery.

European countries, such as Romania, Bulgaria and the Ukraine – with promises of jobs in Germany. After arms and drugs, human trafficking has become the third largest and most lucrative business of organized crime in Germany worth billions of euros. Besides the work to prevent pupils from being recruited, Soroptimists aim to inform the wider public about this brutal trade, which treats women as a commodity. SIE President Renata Trottmann Probst applauds the initiative: ‘This is standing up and fighting for women at its best and covers 100% the biennium theme!’

SI Club Aalen/Ostwürttemberg also printed protest postcards to take their campaign against human trafficking and sex slavery to politicians. In the meantime 1500 of these postcards have been sent to German Federal Minister for Family Affairs, Senior Citizens, Women and Youth Franziska Giffey, some of which were posted from Romania.

‘This campaign, which was a runner up for a Federation Best Practice Award, is a good example of how Advocacy can be used to tell the story and to demand change,’ says SIE VP for Advocacy Elizabeth Nyadwe.

The campaign activities have been funded solely by donations. One of the Club’s most successful fund-raising efforts is a garden tour through Southeast England. Another tour is planned in 2019 so look out for the announcement. 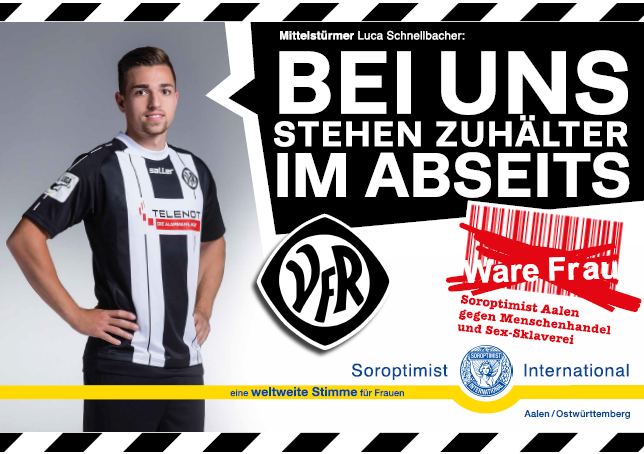 Some 1500 postcards were sent to the German Federal Minister for Family Affairs, Senior Citizen, Women and Youth.